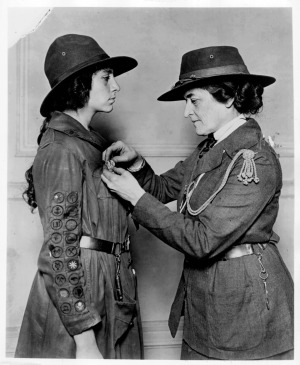 Not only is October 31 Halloween, but it is also the day that Girl Scouts of the USA founder Juliette Gordon Low was born!

Juliette Gordon Low was born into an elite family of Savannah, Georgia in 1860. Though she was educated in subjects typical for a woman of her elevated social class such as drawing, piano, and speech, she yearned to explore, play tennis, and ride horses. Her friends and family members noted her empathy for others, unconventional outlook on life, and eccentric and adventurous nature that stuck with her through her adult years.

In 1911 she befriended William Baden-Powell, a war hero and founder of the Boy Scouts, with whom she shared a love of art and travel. They began sharing ideas for the formation of a scouting troop for girls, with an emphasis on the idea that training should be fun.

The early troops known as the “Girl Guides” were led by William’s sister, Agnes, and consisted of girls who has appeared in their brothers’ Boy Scout troops. They were eager to learn the same kinds of skills that the boys were and after starting troops in Scotland and London, Low decided to bring the program to the United States. Noticing the massively positive effect it had on girls’ self-esteem, she used her own money and resources to register the first troop of 18 American Girl Guides on March 12, 1912 in her hometown of Savannah, Georgia. 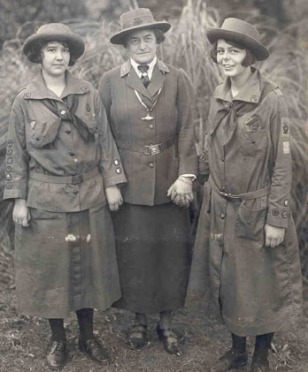 Renamed the Girl Scouts in 1913, Low dedicated her life to making the Girl Scouts into an internationally renowned organization. She suffered from breast cancer, keeping the diagnosis a secret until her passing on January 17, 1927. With her love for travel in mind, her friends established the Juliette Low World Friendship fund to finance international projects for Girl Scouts and Girl Guides.

Juliette Gordon Low has been honored with numerous awards to commemorate her efforts ever since, including her induction into the National Women’s Hall of Fame in 1979 and Barack Obama naming her a recipient of the Presidential Medal of Freedom in 2012.

Today, Low’s Girl Scouts of the USA continues to serve as one of the most important educational organizations for girls in the world. We currently have 1.8 million girls and 800,000 adults who are a part of Girl Scouts, and together we honor Juliette Gordon Low’s vision and legacy of building girls of courage, confidence, and character who make the world a better place.

Girl Scouts offers every girl a chance to practice a lifetime of leadership, adventure, and success. With programs from coast to coast and across the globe, we serve to help girls develop their full individual potential. Through experiences such as sports clinics, field trips, community service projects, cultural exchanges, and environmental stewardships, Girl Scouts continues to empower girls everywhere.