In January of 2018 after a brutal series of fires and subsequent rainfall, devastating mudslides occurred in the city of Montecito. Less than 20 minutes away lies Carpinteria, where Emily Calkins was in her junior year at Cate School. As her community struggled to rebuild after the natural disaster, she couldn’t help but be grateful for the local resources that the victims relied on. Emily recalled when the beautiful city of Cinque Terre, Italy faced heavy damages after a major flood in 2011, and she was inspired to take action on a global level.

“I had seen the videos and news articles of the flood in Cinque Terre, but only when there was water at my own doorstep did I fully understand the consequences and destruction left by this disaster,” Emily said. “Locally, we are lucky enough to have a government and natural disaster teams to help us repair the damage and transition back to normal life as soon as possible. Unfortunately, in Italy the government is slow to act and pleas for help sometimes get lost in the path to action.

“Even though the tight-knit community of Vernazza came together to try to repair the village themselves, there was still much to rebuild. I felt that because I was affected by the same natural disaster and understood the difficulties coming out of that situation, that I could do something to help families that didn’t have such a quick recovery. And by going to the very base of the problem, I would be preventing such a disaster to occur at such magnitude in the future.” 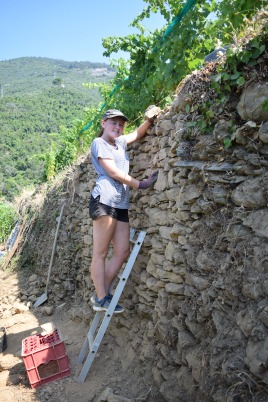 Traveling internationally for the first time alone, Emily set out to rebuild unstable Italian vineyard terraces at a UNESCO World Heritage site in order to keep them from falling into the ocean. The ancient villages are built on very steep cliffs, and the terraces are vital for keeping them protected during major storms. She learned the complex art of Italian masonry in the northern region of Liguria, which is unique as it does not use any materials unnatural to its environment. Over the course of a month, she completed the restoration of two 10-foot-tall terraces that had been previously neglected, leaving the hillsides weakened. Emily received support from a local group called Save Vernazza, who work to restore the villages after the flood and bring awareness to the importance of maintaining the surrounding geography.

In Cinque Terre, the families that had been tending to the hills where grapes grow and kept the villages up for centuries have left in pursuit of a profitable career in tourism. This exodus has ultimately left the region in a vulnerable state.  “During my stay, I raised awareness of the effects of over-tourism and helped advertise for ecotourism,” Emily said. “When I came home, I taught my local Girl Scouts about the skill of masonry and the history of the Italian vineyards, which is historically woman’s work even though it involves moving large rocks and working the land. I connected a tragedy that had happened close to me to a similar tragedy far away, and built bridges to connect the two and make a difference where others were turning away.”

The terraces Emily repaired are fixtures set in stone and will last for multiple decades. In October of 2018, another severe storm hit the province of Liguria where Emily had been working on her project. This time the storm resulted in no casualties, no serious injuries, and no major damage. Emily was able to share her experience through presentations and activities with other local Girl Scouts and nonprofit summer day camps. She educated on the life and culture in Italy, and demonstrated how she rebuilt the terraces through miniature models made out of cereal to represent rocks. Additionally, she was able to work with an American blogger who lives in Italy, Cinque Terre Insider, to raise awareness of the harm of over-tourism. 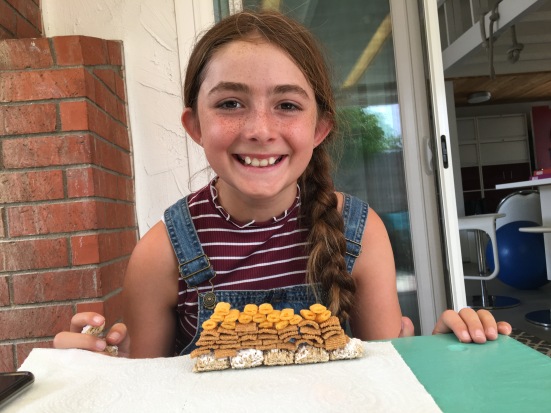 Emily hopes that others will be inspired to leave every place they visit better than they found it. “I hope that I’ve started a wave of people seeking to have real experiences while traveling and make a difference in the places they travel to,” she said.