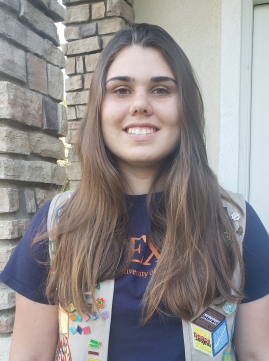 Megan Larson grew up with ties to the military community due to her father’s position in the United States Army. As a Junior Girl Scout, her troop took a field trip to the Veterans Home of California in Ventura. She was so impressed that so many of our nation’s heroes lived at this facility, however, she noticed a lack of interest in outdoor exercise. In order to remedy this, she set out to refurbish the neglected outdoor bocce ball court to give back to the veterans and allow them to lead a healthier lifestyle.

A current senior at Rancho Campana High School in Camarillo, Megan began reaching out to Stacie Merkes of the Ventura Veterans Home in April. She established a timeline for her project, applied to online grants, sent donation letters to potential vendors, coordinated a landscaper, and recruited volunteers from her family and Girl Scout troop to help with production. 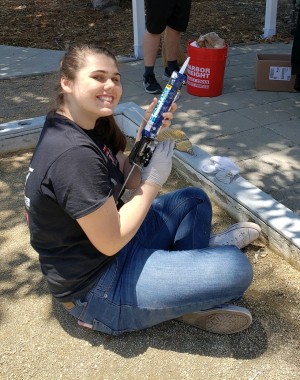 With the help of volunteers, Megan updated the scoreboards by stripping and repainting them, as well as replacing the wooden numbers with brass ones. The bocce ball court was stripped, sanded, primed, painted, and caulked, with the new turf installed last. She also installed an umbrella for the scorekeeper post and included handicap railings to make the court more accessible.

“The Bocce Ball Court is a permanent fixture at the Veteran’s Home in Ventura and the Vets play twice per week (scheduled) Wednesday and Friday mornings,” Megan said. By installing turf for the surface, it will reduce future maintenance. Also, by installing the handicap railings, more veterans are able to play bocce ball, even if they use a cane.”

Through private donations, two years of Christmas and Birthday savings, product sale earnings, and recycling, Megan was able to raise over $5,000 for her project. The funds were used for the building materials, refurbishing the scoreboard, a professional bocce ball set, and party supplies for the final tournament.

Residents of the Veterans Home received flyers that Megan created to advertise the event, and the turnout was fantastic. She baked two Texas sheet cakes for 64 people, and with donuts and balloons in hand, headed to the tournament. In total there were three games between four teams.

“I feel that the Bocce Ball Tournament was the most successful (and rewarding) aspect of my project,” Megan said. “Many more veterans came to either play or watch, and it was nice to see the handicap veterans be able to play with the assistance of the handicap railing. 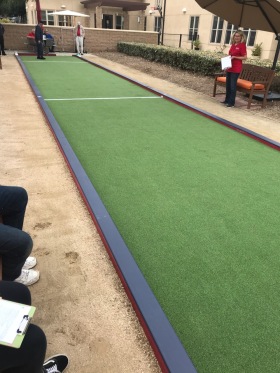 “Improving the health of veterans and senior citizens is an initiative that should be addressed globally. My project moves to promote these ideas in a small community. By sharing my project on social media, I hope others will be inspired to continue this initiative.”

To see the completion of her project, check out Megan’s Gold Award video here. Want to learn more about how you can leave a lasting impact on your community and the world beyond? Find information about the Gold Award here.