The engine started with a tremendous roar and a thrum.

The following is part of a multi-part series . Melissa Baffa, Vice President of Program and Volunteer Services for GSCCC, is part of the Corps of Exploration this year on the adventure of a lifetime. This blog series will chronicle her dive into the Unknown.
¸.·´¯`·.¸.·´¯`·…¸>     `·.¸¸.·´¯`·.¸.·´¯`·…¸>    `·.¸¸.·´¯`·.¸.·´¯`·…¸>
The engine started with a tremendous roar and a thrum. “The amazing vibrating bed,” I thought to myself, and laughed. My alarm was set for 7 am. It was only 6. There was no way I was sleeping any longer. I got up and dressed, grabbed my camera, and found my way outside.
The light was the kind of golden early morning light that makes getting up early worth it. We were just approaching the large span bridge we’d been able to see from where we’d been docked the past several days. The air was warm, not hot, but humid enough to fog my lens at first.
On the upper deck, the breeze created by our passing was refreshing. Several of us gathered there as we slowly trundled out toward the Pacific. After a short while, we stopped and dropped anchor. A small boat pulled up alongside, and the hull cleaning began.
Divers used scrub brushes, spatulas, and a large double-brushed device reminiscent of a floor polisher to clean the hull. While they worked, Julye, the ship’s documentarian, filmed them underwater with a Go-Pro camera mounted on a pole.
Now that we were going to be underway, there was work for me to do. Several of us “onsigners” attended a safety briefing. Then Juan (a UCSB student working on his master’s degree, and serving on the ship as a data logger) and I attended refresher training in the control van.
By now, the sun had risen high in the sky and it was HOT. Stepping into the air conditioned van was wonderful. We ran through basic procedures and asked a million questions. But really, the true test will be on the first watch that I sit. I am glad to know that either Jack or Bob (from the video team) will be sitting next to me.
As we were wrapping up the training, we heard the engine come to life again with a shuddering growl. “That’s Thor!” Bob exclaimed. I was elated. We were finally on our way to the Galapagos!
Stepping out of the control van, I looked behind us. Huge thunderheads towered in the sky, and lightning streaked the sky. We were leaving the area just in time. Heading back downstairs, I checked emails and Facebook, and saw that my friend Christy had spotted me on www.nautiluslive.org while I was in the control van! It’s so incredible that I can share this experience so immediately with everyone.
The afternoon was free. I spent it on the uppermost deck by myself, listening to music and admiring the brown boobies that soared and swooped in front of the ship. They seemed to be using our wake to their advantage, diving occasionally to snatch up a fish disturbed by our progress.  And then I saw something large splash in the water to starboard. Earbuds out, I scrambled to that side of the deck, camera in hand. After a few minutes, I heard a wet plop! and saw a ring spreading on the water. Watching intently, I heard it again, to my left. What the heck?

And then I saw – rays! Leaping out of the ocean, some several feet in the air, and bellyflopping back down into the water. I couldn’t believe it! I watched and waited, and started to see the pattern of their behavior, and after a few more minutes, was successful in capturing some photographs of their acrobatic feats. 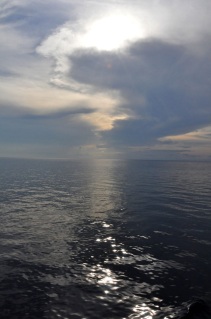 The sun sank lower in the sky, and the water took on that marvelous greasy look when it’s particularly glassy out. It was time for dinner, time to head downstairs again. A beautiful sunset rounded out the day. We have about three days’ worth of transit time to the Galapagos. Who knows what amazing things we will see next?

Skip to the next blog post by Melissa: To the Galapagos: the day in photos