Happy World Oceans Day! Today we celebrate the ocean, and all it does for us. Oceans cover 71% of our planet. They were the birthplace of life. They determine our weather and climate. They feed billions of people. Their chemical composition nearly mirrors that of our blood.

The past couple of days have been a time of change. We have taken on new Corps members, and some have left. We have moved to a different location. And, for the first time, the ROVs are getting woken up. 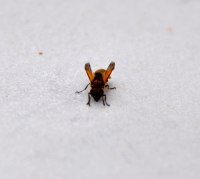 But the really big news of the day has been the BEES. A swarm of them infested the mast a couple of days ago, and we were warned not to go on the monkey deck, because they were avidly stinging crew members. Today, a group of them started to swarm the small boat crane, next to the control van. A little later, they started to enter the control van through the air conditioning ducts. After the fifth person today got stung, the daily cleaning efforts of the ship (necessary partly because of our nighttime avian visitors and the “presents” they like to leave behind) turned to include the bees. As of now, the bees are not a problem.

When we moved from the Puerto Ayora area to Baltra, I stayed outside despite the threat of bees. Scanning the horizon, I saw a huge splash. Watching carefully, I blazed off a handful of shots as it, whatever it was, leaped again. It was far enough away that I could not see what it was, just the huge splash. I thought maybe it was a small whale or large dolphin. It was only later, upon review of the photographs, that I could see it was a huge manta ray, leaping out of the water.

A lot of new people joined the expedition the past couple of days, including Dr. Ballard and his daughter Emily. The energy on the ship is much different with their arrival. The past several hours have been devoted to the arrival of our onsigners, letting them settle in, and tours of the ship. Later we will have our safety briefing, and tomorrow our next muster drill. Also tomorrow, we will again cross the equator, which means another Line Crossing Ceremony for all our new pollywogs. Now that I am a shellback, I will get to see the ceremony from the other side.
The down time has been good to catch up on emails, photos, and writing. And now we have a lot more people to get to know as well. In two days, we have our first dive scheduled. I am so excited!

Skip to the next blog post by Melissa: Dive Alert!