Marsha Hill is a staple of Girl Scouts of California’s Central Coast’s community. Following her time with Girl Scouts as a child, she became a Lifetime Member in 1992 and is in her 29th year of adult membership.  Along with Holly Nishida, she is the co-director of Kaleidoscope (you might know her as “Harpo” from camp).

She began her journey with Girl Scouts in second grade as a Brownie, and continued until sixth grade while growing up in Minnesota. Marsha recalls being inspired by volunteers who were part of a camp-out her troop went on. “[One woman] baked a cake in a solar oven!” said Marsha. “I had never seen such a thing happen. I wanted to be like her.”

“My troop leaders made me feel like they were there for me and were always so kind,” she said. “They trusted us to do some of the grocery shopping for the camping trip, which was quite a big deal for 10-year-olds. I wanted to pass on those things to my girls and to others.”

Her dedication to Girl Scouts continued when her two daughters, Julia Hill Narendra and Leslie Hill, wanted to join. At the time her eldest joined as a Brownie she was a Cub Scout leader for her two sons, and soon she was helping lead both of the girl’s troops. She continued volunteering after both of her daughters had graduated high school and became a Learning Facilitator. Marsha helps run a wide variety of Girl Scout events, including Day Camp, Program Aide Core Training Classes, and Skills Day. 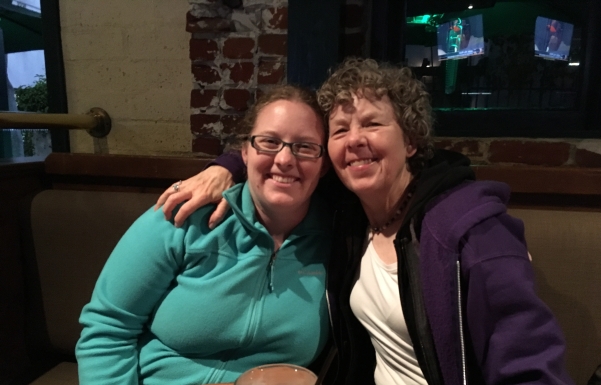 “Both of my daughters benefited from Girl Scouts in so many ways,” Marsha said. “My younger daughter is pretty shy, and selling cookies, teaching younger girls how to tie knots, and helping at Day Camp brought her out of her shell. My older daughter also benefited, mostly from selling cookies. She learned how to read people, as in even though they say one thing, they really mean something else, which is hugely helpful in life. She wrote her college application essay about how much she learned in Girl Scouts. Both girls also learned about giving to others through the troop community service projects we did.”

For Marsha, she says volunteering is worth her time for a number of reasons. “Seeing the looks on girls’ faces when they complete a challenge at Kaleidoscope because they are very proud of themselves; listening to comments about GS Day Camp – ‘See, I told you it would be fun!’; knowing I’ve helped leaders and older girls in leading their troops and Day Camp units. Others should volunteer for the same reasons. Young people need good role models.”

Her favorite Girl Scout story is from an experience she had with her own troop. “I learned not to be so fussy about food in Girl Scouts. Our troop had a cook-out in my backyard’s woods where we dug what was called a ‘bean hole.’ We put beef, carrots, onions, and potatoes into a roasting pan over the coals and covered it. For some reason the food took forever to cook and even though I didn’t like cooked carrots or cooked onions, those were the best tasting carrots and onions I had ever had (at 10:00pm that night).”

If she could have Girl Scouts take one key life lesson from the program, it would be “to love the outdoors and treat it with respect. I think from doing this, girls learn a lot about themselves and they see how others treat the Earth.”

“Girl Scouts is an organization that nurtures girls to become the best that they can be and help others to do the same,” she says. “It covers so many kinds of activities – community service, camping, leadership, songs-games-crafts, outdoor skills, budgeting, travel, and on and on. There is something for everyone.”

We are so grateful to have volunteers like Marsha as a part of our organization, helping us in the mission to build girls of courage, confidence, and character. If you are interested in becoming a volunteer or would like to find out more, visit here!