Lisa McKinny originally began her journey with Girl Scouts when her daughter’s first two troops disbanded. Now with her daughter Emilie at age 25, she continues to be a part of Girl Scouts for an entirely different reason.

When asked why volunteering is worth her time, Lisa says, “I have seen over the years how Scouting has made a difference in so many girl’s lives. I truly believe that if a Leader is dedicated and uses the GSUSA program to its full potential, it can really help girls develop into their very best self! Who wouldn’t want to be a part of that?”

Emilie scouted from 1st grade through high school, with Lisa as her troop leader starting as a Cadette. She was able to see the effects of scouting first hand with her daughter, about whom she says, “Through Girl Scouting Emilie learned that she could do anything! She learned dreaming, planning and goal-setting skills. She has traveled the world and lived in other countries for her work. I believe she is who she is today; a confident and courageous young woman, because of Girl Scouting.”

Lisa has had plenty to learn herself from her years of scouting. “I have learned that I have a lot to give and new stuff to learn,” she says. “If I don’t know how to do something, I teach myself. Prior to Girl Scouts, I was not a camper. It just wasn’t something my family did growing up. Now, I teach Outdoor Training for our Council and consider myself a very good camper. I have also learned to backpack and spent two weeks last summer backpacking in New Zealand with my daughter.”

She has also had plenty of exciting adventures with her troops over the years, including a ten-day RV trip through Arizona to the Grand Canyon, and an excursion to Baja, Mexico. “As Seniors, the girls wanted to see the Grand Canyon,” she says. “I had never driven an RV, let alone handled the ‘internal workings’ of one. The girls assured me that if I would handle the driving, they would take care of the rest. They videoed the fellow at the RV rental place as he gave us the RV orientation and they kept their promise. Not once did I hook up to a septic system, they handled it. It was a great experience!”

In the summer of 2017, her Ambassador troop embarked on a journey to Mexico for their last great adventure before the girls graduated from high school. “One of our members was rather timid and agreed to go on the three-bay kayaking excursion with the group under one condition: that she be in a double kayak with me. On our way out of the first bay the sea rays started jumping high out of the water. She was so excited and gleeful to experience this so close-up, but quickly realized that one might land in the kayak with US! We still giggle about that. She now has a tattoo of a sea ray on her side that reminds her of her courage,” Lisa says.

As a Girl Scout volunteer, Lisa has used her role to empower young females in a number 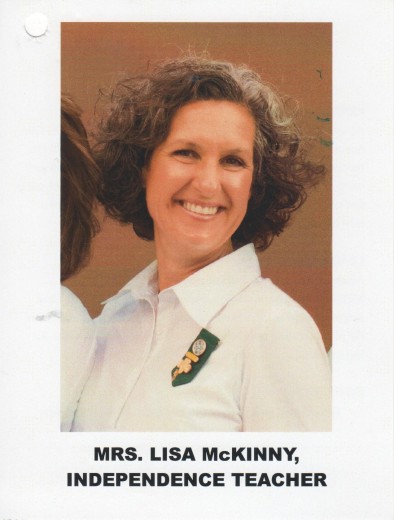 of ways. Most of all, she encourages them to be girls of courage, confidence, and character. “There is one thing I always strive to teach every girl that I cross paths with – that is to be BOLD!” she says. “Bold with speaking her opinions and wants, bold to stand up for what she believes to be right and fair, bold to try new things and bold to dream big. Then, make a plan so it can come true.”

If she could have Girl Scouts take one key life lesson away from the program, it would be that, “you can do anything with a plan and perseverance – and a bandanna might help, too!”

Ready to become a part of the bigger picture? Join Girl Scouts as a volunteer today and be there for every special moment of growth, curiosity, and excitement. Help today’s girls become the next generation of female leaders and join us today!