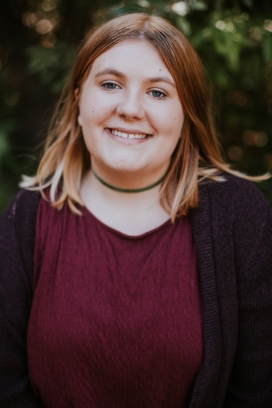 Mollie Cobb is passionate about protecting our planet. A true environmentalist at heart, when she noticed the amount of food waste created by a local elementary school, she knew she had to step in. By creating a lunchroom recycling program and establishing a student-run composting system, Mollie was able to teach her community small ways that they, too, could make the world a better place.

Mollie is currently finishing up her senior year of homeschooling in Lompoc, CA. The inspiration for her project stemmed from a mural outside of nearby Manzanita Public Charter School, which reads, “Every Day is Earth Day at Manzanita.” Schools and other education facilities tend to be some of the largest waste generators in cities across the nation. Mollie set the goal to help the school cut back on waste by getting straight to the root of the issue – the lunchroom.

After contacting the staff at Manzanita, Mollie put up posters around the school inviting interested students to join the “Green Team.” This band of volunteers would ultimately 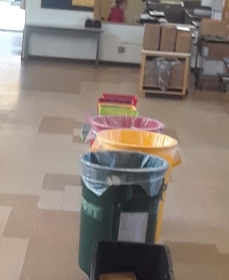 become responsible for running the school’s composting program once Mollie’s project was complete. After researching the difference between waste, trash, and compost, she set up a recycling system in the lunchroom called “Stop, Think, Compost!” Color-coded bins (red for trash, yellow for food waste, and green for compost) allowed for less waste to be sent to landfills, while food-share bins let students give up unwanted non-perishable items from their lunches to other students. Once Mollie initially educated students about the new system during a lunch hour, her Green Team was able to help keep their peers on track. 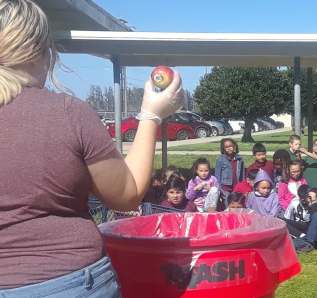 From September 2018 until June 2019, Mollie met with her team to implement the new recycling program and help out around the school, including watering and weeding planters, cleaning out sandboxes, and sprucing up the school’s welcome sign. Their final project consisted of creating a compost bin in the school’s garden, which would be fueled by the green lunchroom bin and produce mulch for future garden projects.

By saving up gift money, recycling bottles, babysitting, and holding yard sales, Mollie was able to raise over $650.00 for her project. She used these funds to purchase supplies to create the compost bin, color-coded trash bins for the lunchroom, and treats for her team of student volunteers.

“Although the project is local, the idea of recycling and composting helps the community and ultimately our Earth,” Mollie said. “The project helps encourage students to waste less at school and hopefully in their homes. Students using what they learned by being part of this project can change the world. They learned that they have to take care of their ‘world’ starting at school or at home, [following with] their community and beyond.” 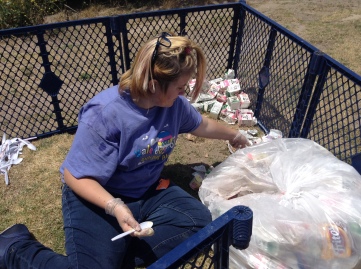 Mollie’s program will be sustained by the custodial staff at Manzanita Public Charter School and the Green Team. The team will also continue to spread the message to their fellow students; at the end of the 2019 school year, they produced videos and posters to educate their peers on the “Stop, Think, Compost!” system.

From her experience, Mollie was able to grow as both an individual and a champion of the planet. “I learned not to be wasteful. I influenced my parents to shop better,” she said. “This next summer we will be building a composting bin and garden in our back yard. I appreciate the Girl Scout Promise and Law so much more now. They were never just words said at a Girl Scout event or meeting, but [I was able] to see the words come to life. I love serving. I am more courageous and strong. I learned to stand up for what I believe in.”

Interested in learning more about the highest award a Girl Scout can earn? Visit here to take your next steps in earning the Gold Award and making an impact in your community and the world beyond!